When I take, for example, Space Quest 2 room 16 or room 22, and compare the ScummVM image to the game running in DosBox, I can see that the splatter patterns are all wrong in the trees in the background. 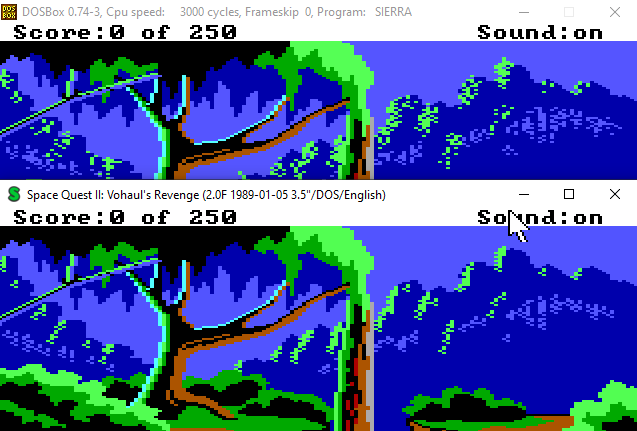 I think way back in github commmit 0d279e8de07fc5 when the AGI splatter plotting was redone, the texture_number variable accidentally got hard-coded to 0. In fact, the texture number should start as the pattern number pulled in plotBrush() (notice: the code at present does nothing with _patNum, which is a clue something isn't right).

I think maybe the resulting plot errors were why a subsequent commit changed the ditherCond from 2 to 1. I believe that was incorrect and should be reverted.

To make the games I have look like the original, I believe the following changes are needed:

1) make plotBrush() store the raw byte it reads in _patNum (forget the >>1 and &0x7f part... that's left over from an older table-based approach to splatter).
2) in plotPattern(), initialize t to (_patNum | 0x01) and forget the zero texture_num.
3) in plotPattern(), change ditherCond back to 2 like it was originally.

I don't have an exhaustive list of games to test this with, but the few AGI games I have which use splatter plots look more accurate to me after these changes. If people agree it's an improvement, I can offer a pull request on github, or I'm just as happy if one of the usual devs makes the fix.

As further evidence, I believe nagi's pic_render.c agrees with the changes I'm suggesting. (​https://github.com/sonneveld/nagi/blob/master/src/picture/pic_render.c). It sets texture_num in plot_with_pen(), and I think in the translation to scummvm, texture_num got converted to a local var and always set to zero.

This seems to be a difference between preAGI and AGI.
I would propose reverting 0d279e8de07fc5137266fb8793dba05e14fccd0b / making it so that the new method is used for preAGI and the original one is used for AGI.

Originally I rewrote AGI to be as accurate as possible and that was all based on reverse engineered work. Please no guesswork, because that could introduce other issues.

Wait, this is very weird. It seems I didn't touch this code at all during my graphics rewrite.
I will have to check my own notes from back then.

Very weird that I left that one as it was.

Well it's been 5 months. Maybe I will submit a pull request with the changes that work for me. Would that be the next thing to try?

The code that's in there is clearly wrong, and the changes I'm suggesting seem to fix the games I have, and as a bonus match more closely with what the nagi engine does. My only hesitation is I don't have every game (and zero preAGI games) to test against.

Please don't, this needs to get reverse engineered properly.

Changes may cause issues down the line. The current code is not accurate, but it may be accurate for some version of agi, maybe even (and that's mostly like it) for preAGI.
And thus it needs to figured out for all AGI versions out there.

I'm kinda busy, but maybe I will lose my job in around 3 months and then I will have as much time as needed for stuff like this.

Version 0, edited 17 months ago by m-kiewitz (next)

Ok, I'll leave it to you then. Good luck!

This bug is nice to get fixed before the release.

Thank you for your report. I double-checked again against the original and indeed, your notes were on the spot. I now committed a fix.

@sev-
Have you checked preAGI as well?

Yes, I saw no difference and no floodfill leaks.

I built HEAD and all the games I have look great now. Thanks for your help. It's amazing the defect lasted 14 years!